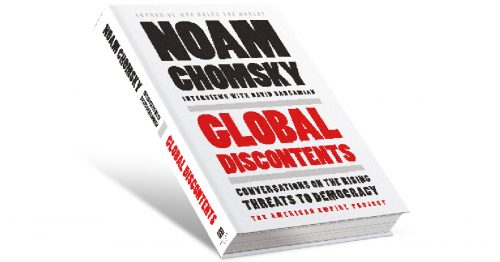 Or How to Further Enrich “The Masters of the Universe”

[This interview has been excerpted from Global Discontents: Conversations on the Rising Threats to Democracy, the new book by Noam Chomsky and David Barsamian to be published this December.]  David Barsamian: You have spoken about the difference between Trump’s buffoonery, which gets endlessly covered by the media, and the actual policies he is striving to enact, which receive less attention. Do you think he has any coherent economic, political, or international policy goals? What has Trump actually managed to accomplish in his first months in office?  Noam Chomsky: There is a diversionary process under way, perhaps just a natural result of the propensities of the figure at center stage and those doing the work behind the curtains. At one level, Trump’s antics ensure that attention is focused on him, and it makes little difference how. Who even remembers the charge that millions of illegal immigrants voted for Clinton, depriving the […]

Nuclear Weapons, Climate Change, and the Prospects for Survival

In January 2015, the Bulletin of the Atomic Scientists advanced its famous Doomsday Clock to three minutes before midnight, a threat level that had not been reached for 30 years. The Bulletin’s statement explaining this advance toward catastrophe invoked the two major threats to survival: nuclear weapons and “unchecked climate change.” The call condemned world leaders, who “have failed to act with the speed or on the scale required to protect citizens from potential catastrophe,” endangering “every person on Earth [by] failing to perform their most important duty — ensuring and preserving the health and vitality of human civilization.” Since then, there has been good reason to consider moving the hands even closer to doomsday. As 2015 ended, world leaders met in Paris to address the severe problem of “unchecked climate change.” Hardly a day passes without new evidence of how severe the crisis is. To pick almost at random, […]

The Costs of Violence

[This piece, the second of two parts, is excerpted from Noam Chomsky’s new book, Who Rules the World? (Metropolitan Books). Part 1 can be found by clicking here.] In brief, the Global War on Terror sledgehammer strategy has spread jihadi terror from a tiny corner of Afghanistan to much of the world, from Africa through the Levant and South Asia to Southeast Asia. It has also incited attacks in Europe and the United States. The invasion of Iraq made a substantial contribution to this process, much as intelligence agencies had predicted. Terrorism specialists Peter Bergen and Paul Cruickshank estimate that the Iraq War “generated a stunning sevenfold increase in the yearly rate of fatal jihadist attacks, amounting to literally hundreds of additional terrorist attacks and thousands of civilian lives lost; even when terrorism in Iraq and Afghanistan is excluded, fatal attacks in the rest of the world have increased by […]

[This piece, the first of two parts, is excerpted from Noam Chomsky’s new book, Who Rules the World? Part 2 will be posted on Tuesday morning.] When we ask “Who rules the world?” we commonly adopt the standard convention that the actors in world affairs are states, primarily the great powers, and we consider their decisions and the relations among them. That is not wrong. But we would do well to keep in mind that this level of abstraction can also be highly misleading. States of course have complex internal structures, and the choices and decisions of the political leadership are heavily influenced by internal concentrations of power, while the general population is often marginalized. That is true even for the more democratic societies, and obviously for others. We cannot gain a realistic understanding of who rules the world while ignoring the “masters of mankind,” as Adam Smith called them: […]

Who Is the Gravest Danger to World Peace?

Throughout the world there is great relief and optimism about the nuclear deal reached in Vienna between Iran and the P5+1 nations, the five veto-holding members of the U.N. Security Council and Germany. Most of the world apparently shares the assessment of the U.S. Arms Control Association that “the Joint Comprehensive Plan of Action establishes a strong and effective formula for blocking all of the pathways by which Iran could acquire material for nuclear weapons for more than a generation and a verification system to promptly detect and deter possible efforts by Iran to covertly pursue nuclear weapons that will last indefinitely.” There are, however, striking exceptions to the general enthusiasm: the United States and its closest regional allies, Israel and Saudi Arabia. One consequence of this is that U.S. corporations, much to their chagrin, are prevented from flocking to Tehran along with their European counterparts. Prominent sectors of U.S. […]

Ceasefires in Which Violations Never Cease

What’s Next for Israel, Hamas, and Gaza?

On August 26th, Israel and the Palestinian Authority (PA) both accepted a ceasefire agreement after a 50-day Israeli assault on Gaza that left 2,100 Palestinians dead and vast landscapes of destruction behind. The agreement calls for an end to military action by both Israel and Hamas, as well as an easing of the Israeli siege that has strangled Gaza for many years. This is, however, just the most recent of a series of ceasefire agreements reached after each of Israel's periodic escalations of its unremitting assault on Gaza. Throughout this period, the terms of these agreements remain essentially the same.  The regular pattern is for Israel, then, to disregard whatever agreement is in place, while Hamas observes it — as Israel has officially recognized — until a sharp increase in Israeli violence elicits a Hamas response, followed by even fiercer brutality. These escalations, which amount to shooting fish in a […]

How Many Minutes to Midnight?

If some extraterrestrial species were compiling a history of Homo sapiens, they might well break their calendar into two eras: BNW (before nuclear weapons) and NWE (the nuclear weapons era).  The latter era, of course, opened on August 6, 1945, the first day of the countdown to what may be the inglorious end of this strange species, which attained the intelligence to discover the effective means to destroy itself, but — so the evidence suggests — not the moral and intellectual capacity to control its worst instincts. Day one of the NWE was marked by the “success” of Little Boy, a simple atomic bomb.  On day four, Nagasaki experienced the technological triumph of Fat Man, a more sophisticated design.  Five days later came what the official Air Force history calls the “grand finale,” a 1,000-plane raid — no mean logistical achievement — attacking Japan’s cities and killing many thousands of […]

How Washington Protects Itself and the Corporate Sector

The question of how foreign policy is determined is a crucial one in world affairs.  In these comments, I can only provide a few hints as to how I think the subject can be productively explored, keeping to the United States for several reasons.  First, the U.S. is unmatched in its global significance and impact.  Second, it is an unusually open society, possibly uniquely so, which means we know more about it.  Finally, it is plainly the most important case for Americans, who are able to influence policy choices in the U.S. — and indeed for others, insofar as their actions can influence such choices.  The general principles, however, extend to the other major powers, and well beyond. There is a “received standard version,” common to academic scholarship, government pronouncements, and public discourse.  It holds that the prime commitment of governments is to ensure security, and that the primary concern […]

The Path to Disaster

What is the future likely to bring?  A reasonable stance might be to try to look at the human species from the outside.  So imagine that you’re an extraterrestrial observer who is trying to figure out what’s happening here or, for that matter, imagine you’re an historian 100 years from now — assuming there are any historians 100 years from now, which is not obvious — and you’re looking back at what’s happening today.  You’d see something quite remarkable. For the first time in the history of the human species, we have clearly developed the capacity to destroy ourselves.  That’s been true since 1945.  It’s now being finally recognized that there are more long-term processes like environmental destruction leading in the same direction, maybe not to total destruction, but at least to the destruction of the capacity for a decent existence. And there are other dangers like pandemics, which have […]

The Paranoia of the Superrich and Superpowerful

Washington’s Dilemma on a “Lost” Planet

[This post is adapted from “Uprisings,” a chapter in Power Systems: Conversations on Global Democratic Uprisings and the New Challenges to U.S. Empire, Noam Chomsky’s new interview book with David Barsamian (with thanks to the publisher, Metropolitan Books).  The questions are Barsamian’s, the answers Chomsky’s.] Does the United States still have the same level of control over the energy resources of the Middle East as it once had? The major energy-producing countries are still firmly under the control of the Western-backed dictatorships. So, actually, the progress made by the Arab Spring is limited, but it’s not insignificant. The Western-controlled dictatorial system is eroding. In fact, it’s been eroding for some time. So, for example, if you go back 50 years, the energy resources — the main concern of U.S. planners — have been mostly nationalized. There are constantly attempts to reverse that, but they have not succeeded. Take the U.S. […]